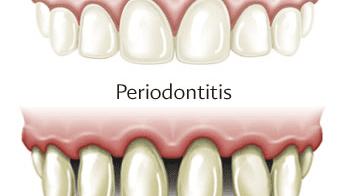 Gingivitis is due to the long-term effects of plaque deposits. Plaque is a sticky material made of bacteria, and food debris that develops on the exposed parts of the teeth. It is a major cause of tooth decay. If you do not remove plaque, it turns into a hard deposit called tartar that becomes trapped at the base of the tooth. Plaque and tartar irritate and inflame the gums. Bacteria and the toxins they produce cause the gums to become infected, swollen, and tender.

Many people have gingivitis to a varying degree. It usually develops during puberty or early adulthood due to hormonal changes and may persist or recur frequently, depending on the health of your teeth and gums.

Good oral hygiene is the best prevention against gingivitis because it removes the plaque that causes the disorder. The teeth should be brushed at least twice daily and flossed gently once per day. For people who are prone to gingivitis, brushing and flossing may be recommended after every meal and at bedtime.

Regular professional tooth cleaning is important to remove plaque that may develop even with careful brushing and flossing. We recommend having your teeth professionally cleaned at least every 6 months.[/vc_column_text][/vc_column][/vc_row]